There are many types of pipes available for various purposes. This includes the cast iron pipes, asbestos pipe, PVC pipes, galvanized steel pipes, concrete pipes, HDPE pipes, to name a few. The concrete pipe which is often referred to as the reinforced cement concrete is one of the toughest material composition. There are many advantages of using these RCC pipes, they are strong, durable and are of good quality.

The RCC pipe (reinforced concrete cement pipes) is also referred to as the RCC Hume pipe since it has an Australian inventor Walter Reginald Hume. It has several applications and hence is widely used for purpose of sewage, stormwater drainage, as well as culverts. The reason why they are so useful is that they are not affected by environmental factors, they do not rust, bend, burn and the fact that they have a durable structure, allows for the flow of high amount of water and are cost-effective.

How Does It Hume Pipe Making Machine Work?

The most common method of manufacturing RCC pipes is the Hume-Spun pipe process however there are now alternative methods too. Since the manufacturing process involves spinning the cage while pouring concrete it is often referred to as the Spun pipe as well. The concrete is usually fed manually and cages are prepared to place in the mould, which depends on the size of the pipe.

Here are a few detained steps to explain the working of the Hume pipe making machine:

With the growing need for water, oil, petroleum all across the globe, pipelines is one of the most cost-effective and preferable ways used by the government for allocation of these resources all around the world. The demand for the hume pipe making machine is also increasing day by day, these machines are known as RCC pipe making machines.

The machine used to create long, broad concrete pipes is known as a pipe manufacturing machine. These machines are made up of stainless steel and are used in factories for building concrete items such as water tunnels, RCC pipes.

With the increasing demand for the pipe creating machines, here are the following scenarios of the RCC manufacturing machine’s market of different countries.

African countries are on the point where, with the growing population the use & need for resources are also inflating. Resources such as oil/water are one of the emerging necessities of these countries and to fulfil the supply of these natural resources RCC pipe machines should be used. RCC pipe machines can create pipelines that can be used to supply resources to various places. 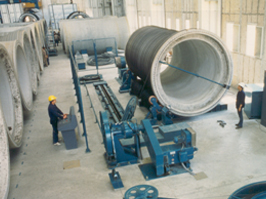 Here are some African countries that are rising demand for the RCC pipe machines:

These hume pipe machines can be used as a solution to cover the requirement of these natural resources because when more pipelines will be created the supply of resources will be easy, and therefore the demand for RCC pipe manufacturing machines is rising day by day in the African countries.

These pipes can supply a huge amount of oil/petrol. To build these pipelines, pipe making machines are highly required. Here are some middle eastern countries where pipe manufacturing machine plays an important role for them:

Saudi Arabia is one of the major countries of the middle east who supplies a huge amount of oil all over the world, and the RCC pipeline machines can play an important role in Saudi Arabia.

Iraq comes under one of the oil-rich countries where pipe making machine’s demand are high.

Iran is the 9th largest oil-richest nation in the world, where 3.2 million barrels per day are supplied through pipelines, and therefore pipe making machines are highly required in Iran.

Therefore these pipe manufacturing machines play an important & beneficial role in the infrastructural development of the middle eastern countries.

Europe is the 2nd largest continent in the world, Europe continent holds some of the richest countries across the globe. The supply of water in these countries is huge. These countries require huge pipelines that can supply water in and out of the nation. Therefore the demand for pipe making machines is high in European nations.

above is this the list of countries that require a huge amount of water supply. By using pipe making machines to build huge pipelines for water supply, these countries can supply water to the cities cost-effectively.

Referring to the current infrastructure development of various countries, it is clear that requirements for pipelines are rising. Hume pipe manufacturing machines have a high demand in the global market.

Every country needs long pipelines that can be used to supply the liquid state resources of the country to in and out of the nation and therefore the demand for pipe manufacturing machines is rising rapidly.

Thus, there are many advantages of using the Hume pipe for the purpose of construction since it is highly durable and reliable. The manufacturing process is a lengthy, one that involves the use of a Hume pipe making machine to ensure good quality pipes.