Concrete pipes have been in use for constructing all major structures across the globe. Non reinforced concrete pipe was used for the first time in culverts and sewers in the United States during the mid-1800s. Its further use under railroads as storm culverts which proved out to be beneficial for the next 100 years sanctioned the use of Concrete pipes for all other important construction. By 1930, the motorized vehicle was put in use to deliver concrete pipes from one place to another at any job site.

From the use of the Primitive concrete pipe, there have been several modifications included in the old concrete to enhance the strength and longevity of the pipes. Reinforced Concrete pipes have emerged as a second alternative for storm systems, irrigation systems. The older support system needs to be replaced with the new modification in order to raise the quality of the deliverables. There are strengths as well as weaknesses of any material that should be tested before they are actually used at the systems. Since the concrete has been in practice for a very long time due to its proven characteristics, the plastic pipe could have been an alternative material. The plastic pipe must be site assembled, which makes the process cumbersome, on the other hand, RCP can be straight forward used at the job site. An overall cost, ease of installation, anti corrosive property of the material, etc. are also considered as a base for modification. 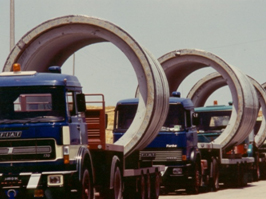 Pressure pipes, as its name suggests, are subjected to a lot of pressure and stress. These pipes are employed generally in the oil fields, water distribution system. The pipes used in such a scenario are placed underground and put under a lot of pressure. A pressure test is what these pipes need to undertake.  The test pressure of approximately 10 bar is applied on the pipe to check whether the pipe can actually bear the load of extreme pressure. The material of the pipe also counts for stability. Stability from UV protection is best enured by carbon black which makes it an ideal choice for the pipe.

Apollo HawkeyePeddarshab concrete solutions are the known brand for providing the best in class casting solution for concrete. Providing a technological and workable environment, this company strives to deliver the products to its clientele across the nation as well as the international border.